This photograph from the 1963 booklet outlining the development and achievements of Thomas Owen & Co. paper manufactures of the Treforest Trading Estate, shows the control desk of Britain’s fastest air knife paper coating machine. Costing £500,000, it was started by James Callaghan, shadow Chancellor of the Exchequer, in September 1963. Doubling the factory’s output, it made NCR paper – ‘the paper which gave copies without carbon’. 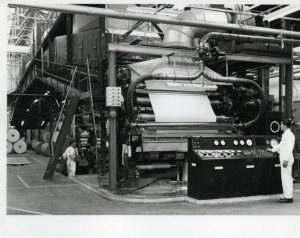 Treforest Industrial Estate was started in 1938 to help encourage employment in South Wales where coal mining and steel manufacturing were in decline. The Thomas Owen & Co. Ltd. factory was bought by Wiggins Teape papermakers in 1956 to manufacture ‘No Carbon Required’ (NCR) paper. Before NCR (and before photocopying!) sheets of carbon paper had to be placed between blank sheets in order to get duplicate copies of typed, printed or written documents, tickets, etc. NCR paper was used for airline tickets, teleprinter rolls, statements, invoices and account ledgers. The base paper was made at Ely Mill in Cardiff and the coating done at the factory in Treforest.

In 1956 120 people produced the NCR paper which was exported to most parts of the world outside North America, to 55 countries. This was a factory unique in Britain making a product which was in great demand throughout the world. The factory continued to be upgraded with new technology and modern machines and by the time this prospectus was printed in 1963, 588 people were employed and machines operated 24 hours a day 5 and a half days a week